In case you missed it

It's been awhile since KnockoutJS released it's latest stable iteration 3.2. It was a real slow paced development however it introduce some of the most wanted features KnockoutJS was missing since the beginning. KnockoutJS community didn't make any fuss over it's release. Hence, ICYMI article.

3.2 is purely feature-centric along with some minor bug fixes and patches. Find detailed change log on github.

KnockoutJS 3.2 comes with several new features worth taking a look. If you are serious about making your HTML code more readable and avoiding memory leaks, you should definitely refactor your code and use these features.

Although ko.computed is one of the powerful key features of KnockoutJS. In the same way, ko.computed, if used without care, is prone to memory leaks which can heavily impact your application's performance. Fortunately, there's a fix for that. 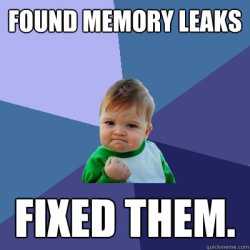 Pure computed variables, defined as ko.pureComputed, do not maintain subscriptions to its dependencies when it has no subscriptions at all. Resulting improved performance and prevention of memory leaks. Pure computed variable is in sleeping state when there are no subscribers, which means it pauses the evaluator. It enters in to the listening state as soon as there is a subscriber resulting immediate invocation of an evaluator.

I have customized the default example from pureComputed documentation in order to demonstrate the exact difference between ko.computed and ko.pureComputed.

In above example, you will find pureComputed function executes only when the view including that variable is visible unlike regular ko.computed variable which is executed on every key hit. Huge performance improvement, isn't it?

When and when not to use Pure computed observables?

Well there is a lot to talk about how dependency tracking works. It's impossible to write it in an single article that covers multiple features. Head over to pure computed documentation if you want to learn more about it.

Web Components are already proving to be the next big thing and the future of web. KnockoutJS "Components" are heavily inspired by Web components. Components are a powerful, clean way of organizing your UI code into self-contained, reusable modules. Which results improved scalability of web app developed on top of KnockoutJS.

KnockoutJS always lacked the modular development out of the box. Yes, there were helpers and extended frameworks available (see DurandalJS) but many of the developers do prefer out of the box feature over extensions.

Some key features of Knockout components -

Head over to [Knockout components documentation ](http://knockoutjs.com/documentation/component-overview.html)for more information on how to write and reuse components, there's a lot to read about it.

While component binding improves reusability of an application, it's HTML markup still is sort of inconvenient to read. Let's take a look in above fiddle.

It still doesn't look good for human eyes. With custom elements, instead of writing above markup, you can write this -

Custom elements make the markup look much cleaner, easy to read and most important, it is valid!

Well, there is no solid information about new feature implementations and bug fixes in upcoming version v3.3 (version number might change in future). But I have managed to get some idea about what's going to change and being added in v3.3 by looking at the Github repository itself. The feature set being listed below might change in future. It depends upon the contributors

I am working more on AngularJS these days but KnockoutJS still remains one of my favorite frameworks to work on. It suffice all the needs of small web applications. With components like features, it has become more scalable and reusable.

Hope you liked the excerpt,